Our first full day of the World Parkinson Congress started late because we both overslept. I guess all the travel caught up with us. Our hotel, the Quality Inn, had a free breakfast buffet included, and we managed to get there right before they closed. As we were eating, a lady with a WPC badge (I think the entire hotel was filled with attendees) recognized me and asked me about DBS. I explained the procedure and gave her the link to My DBS Story blog.

We headed over to the Convention Center to hear Dr. Okun speak about what to expect long term with DBS, but instead he spoke about using DBS for other purposes. Someone tapped me on my shoulder. It was Sherryl Klingelhofer from Tillamook, Oregon! She is a Master Fitness Trainer who makes videos of Parkinson's specific exercises (link on left sidebar.) Her Dad had PD. She is staying at the same hotel as we are. It was exciting getting to meet her in person! 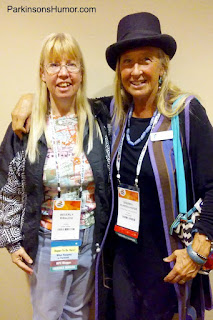 We walked over to the exhibit hall where I had a meeting with Emilie, one of the representatives of St. Jude Medical (another DBS manufacturer.) St. Jude had the best multi-berry smoothies at their booth. 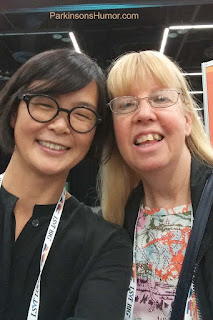 As we were finishing up, her next appointment arrived and it was Karl Robb, from Virginia, another long time online friend! Karl is a blogger and author and also runs a PD support group. A link to his Soft Voice blog is on the left sidebar. Karl was diagnosed with PD at 23. 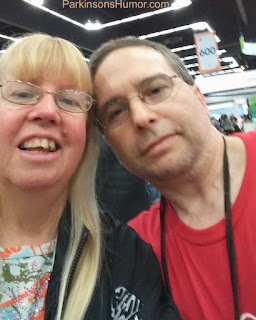 We visited a bit, and then we wandered around and saw Sara Rigarre from Sweden! Sara blogs about self care awareness at Quantified Self. Sara has had PD symptoms since she was 13. 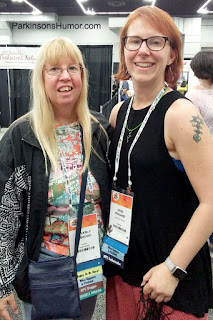 Next I filmed a Tips & Tricks spot for my Twitter friend David Sangster from the United Kingdom and The Cure Parkinson's Trust. David was diagnosed at 29 and runs the Young Parkinsons Network in Manchester, England. 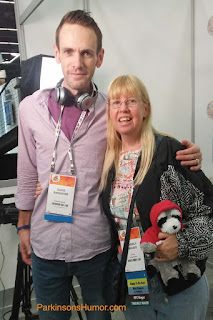 As I was leaving David, I ran into Gretchen and Michael Church from Florida! They are married authors, advocates and both were diagnosed in their 30's. Both have had DBS surgery. 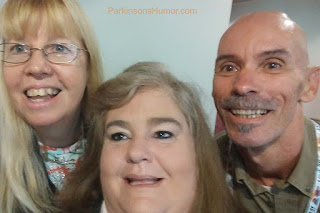 I walked over to take a look at the selection of books in the Book Nook and took a picture of my book. 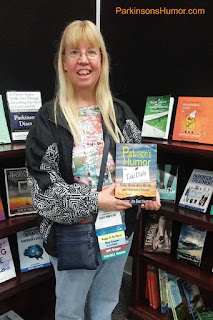 By this time, the day's events at the Convention Center were winding down and we only made it to one educational seminar (Dr. Okun.)

We walked back to our hotel, relaxed a bit and updated my Facebook and Twitter pages and then went to the Support Group Leader Reception (more free food) at the nearby Doubletree hotel.

We sat with Karyn from Australia and the Radio Parkies group. My Wonderful Husband was a radio station and nightclub DJ in his working life, so he really enjoyed learning how they broadcast over the internet. We agreed to stop by their broadcast room sometime tomorrow for an interview.

Sherryl was there, too, and we walked back to our hotel together. She told me she saw us yesterday when we were checking in. She was swimming in the pool. I saw a woman swimming, but didn't recognize her (probably because she wasn't wearing her trademark hat!) It was another full day of fun and I can't believe how many celebrities in the world of Parkinson's disease I've met already!

You probably noticed I am wearing a jacket in almost every picture. It was 107° when we left Yuma, so being in Portland where the temperature was about 68° was cold to me. When I get chilled, I scrunch up and it causes me pain.

Clicking on the colored words will open a new window and take you to a different story or website.
Posted by Parkinson's Humor by Yuma Bev at 7:57 AM