The Good, the Bad, the Ugly and My Sequin Dress!

I never had any problems writing humor stories about my life with Parkinson's disease. I'm not sure why, but I think it's because I felt terrible prior to getting diagnosed and within a day or two of taking carbi/levodopa I felt a whole lot better, so sharing my happiness was easy.

Breast Cancer is different. I am having a hard time finding anything funny about it. Prior to my diagnosis, I felt fine. I didn't have any pain. Sure, I had the lump in my breast, but I assumed, like most of the Doctors who examined me, that it was scar tissue from a previous benign biopsy. It wasn't, of course, so like Paul Harvey would have said, "Here's the rest of the story."

May 7th, 2013 started way too early; we went to the hospital, where I got into the lovely surgical gown and way too big surgical socks. A nurse did the usual list of medications, allergies, weight, blood pressure, have you eaten, blah, blah, blah and then the fun began...

First, I went to radiology, where they injected radioactive stuff into my right breast. From there we went a few blocks away to another building where they put a locator wire and some blue dye in the same breast. A mammogram was done to make sure the wire was in the right spot and then it was back to the main hospital.

Next we were off to the obstetrics department where they normally deliver babies, I'm not quite sure why I went there instead of the main operating room, but I didn't ask. A nurse started an IV in my arm and within minutes, I complained that it felt strange, so she took it out. The anesthesiologist came in, said she'd do the IV in the surgery and off we rolled.

The next thing I remember is waking up and feeling like I was in an oven. They had hot blankets piled on top of me, trying to stop what they thought was me shivering uncontrollably. I wasn't shivering at all. I was having internal tremors from being off my Parkinson's medicines and having my DBS unit turned off all day. They quickly removed the blankets, but I was over-heated and ended up getting sick to my stomach. Guess I have to add one more thing to my "hospital" list, or better yet, I think I'll just stay away from hospitals altogether.

While I was still in recovery, I went to reach for something with my right hand and my arm wouldn't move at all. This was very bad. You should have seen the faces of the Doctors and Nurses, they went completely white. They didn't know what to do. The surgical staff couldn't get in touch with any of the local neurologists or neurosurgeons because they were all in Phoenix watching a new DBS procedure. I had them go get my cell phone from my Wonderful Husband and call Dr. Maria De Léon, a Movement Disorder Specialist who also has Parkinson's. Thankfully, I had her personal phone number and she told the Surgeon what had happened to my arm.

Fortunately, the feeling slowly returned and now, three months later, my right hand and arm are back to pre-surgery normal. What caused this, who knows? But it's another reason for me to stay away from hospitals.

We left the hospital that evening and came home a few days later. The Doctor called on Friday and said something like, "The margins were clean and so were the lymph nodes, so we think we got it all." This was very good news.

The ugly bruise on my arm from the "strange feeling" IV is still visible months later, but the blacks and blues from the breast surgery disappeared within a month. How strange is that? By the way, I was showing off my newest sequin gown at a party for the APDA in Arizona just 10 days after surgery! 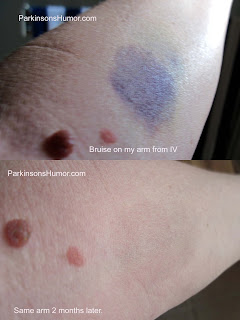 
Clicking on the colored words will open a new window and take you to a different story or link.
Posted by Parkinson's Humor by Yuma Bev at 6:30 AM

Parkinson's Humor by Yuma Bev
My name is Bev R and I was diagnosed with Parkinson's Disease at age 47, but my symptoms started in my 30's. Humor comes naturally to me and a little disease like Parkinson's can't take it away. I have been married since 1985 to the most Wonderful Husband in the whole world. I like Photography and Karaoke.

The Parkinson's Disease Support Group meets the first Monday of each month (except Sept) at 9 am at Daybreakers Cafe 10800 N Frontage Rd, Yuma AZ 85367 (I-8, exit #12 Fortuna Blvd, go north, on left, behind the truck stop). Everyone welcome, including care-partners and families of people with Parkinson's. For more info, contact Ron Myers at 928-446-2462 or via email at YumaRon57@gmail.com