This blog story is about MY experience with Parkinson's medicines.

Since my DBS surgery, I take a lot less Parkinson's disease medications, but I still have people asking me questions about side effects, drug interactions and what particular meds I take or took. Everyone reacts differently, so only YOU and YOUR Neurologist can figure out what works best for you.

I am not a Pharmacist or a Doctor, I am just YumaBev, the Happy Parkie, so I will share only my personal experiences. You should ALWAYS consult your own Neurologist or Pharmacist regarding medication dosages and side effects.

That being said, here are some useful tips I've learned over the years:

1. Use the alarms feature on your watch or cell phone as a reminder to take your meds. In my warped sense of humor, my "drug alarm" ringtone is the song, I Want a New Drug by Huey Lewis.

2. Never start a new medication (or increase the dosage) on a Thursday or Friday, because if you have a bad reaction over the weekend, you won't be able to get in touch with your Neurologist before Monday.

3. Some side effects, like nausea or sudden sleepiness, may go away within a month or two.
Other side effects, like dyskinesia, edema (swelling of legs, ankles or feet), cognitive problems (some have referred to this as brain fog), insomnia or obsessive or compulsive disorders may take a while to show up or become worse with age or the longer you take a medicine.

4. Ask your Neurologist exactly what times you should take your meds and what other things, including over-the-counter medications, supplements or foods such as proteins, aged cheeses, alcohol, caffeine, etc. you should avoid. Also ask what kinds of over-the-counter cold medications or pain relievers are safe to use.

5. Make sure your Doctors know EVERY medication you take, including supplements and over the counter meds. Don't lie about how much alcohol you drink or how many pain meds you take. A friend nearly died because he lied to a Doctor about how much prescription pain medication he was taking prior to an outpatient procedure and he had a severe reaction when they gave him anesthesia. If you use cannabis, make sure your Neurologist knows this, too.

6. If you need to be hospitalized, ask the admitting physician to put in writing that you may take your OWN Parkinson's medications while hospitalized. If you can't do this, make sure YOU know exactly WHAT you take and WHEN you take it and tell EVERY medical person you encounter that you NEED your Parkie meds on time. Check with the nurse to make sure they are giving you the CORRECT medication and dosage EACH time. Do not let them substitute unless your Neurologist okays the change. A lot of neurologists don't have hospital privileges, so be careful.

7. If a medication begins to make you feel worse or the side effects become unbearable, tell your Neurologist as soon as possible. Don't stop taking meds cold turkey, unless you are advised to do so by your Neurologist. Many Parky meds require weaning off.

8. Some Parkinson's medications (or the disease itself) MAY increase your risk for certain cancers, including melanoma skin cancer, breast cancer (men can get it, too) and prostate cancer, so have regular screenings. 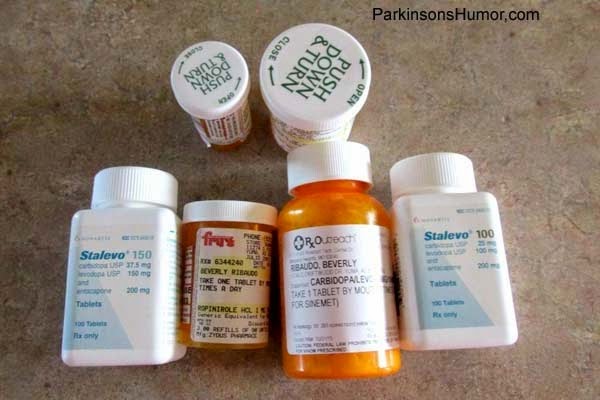 Okay, now here's my medication story. Keep in mind that my reactions to various medications may not happen to you.

Back in 2004, a Neurologist thought I had Essential Tremor, so the very first medication I was ever given was a beta blocker called propranolol. It is used to treat high blood pressure and irregular heartbeats as well as prevent migraines and chest pain (angina). It can also help reduce tremors. It worked fairly well at controlling the action tremor in my right hand, but didn't help anything else. My normal blood pressure is low, and the medicine slowed my heartbeat so much that, over the years, I became winded just walking to our car. The dose was lowered and I could walk without wheezing like a 98-year old man, but the tremors returned.

In 2007, a different Neurologist figured out I had Parkinson's and I was given carbi/levodopa 25/250 and told to stop the propranolol, unless my tremors got worse. They didn't. I was told to take 1/2 a pill three times a day on an empty stomach, so I took them at 8 hour intervals. Nausea was an early side effect, mostly when I took my first pill of the day. I found, by accident, that if I took my pills with lemonade instead of water, the nausea disappeared. Then we adjusted the times I took my pills and found, for me, taking them at 8 am, 2 pm and 8 pm worked better at controlling my symptoms and made scheduling meal times a lot easier for my Wonderful Husband. Later on, the nausea disappeared completely. After approximately three months, I began waking very early. The nights of only 4-5 hours of sleep continued until after I had the DBS surgery.

After about 6 months, my Neurologist tried prescribing Stalevo 100, which is a combination of carbi/levodopa and entacapone. I didn't see any difference and I had the unpleasant side effect of a burning sensation when urinating and my urine was dark yellow, so we went back to the plain carbi/levodopa.

Later, he added pramipexole which is a dopamine agonist and I started with the 0.125 mg dose, three times a day. When he upped the dose to 0.25 two weeks later, I made the mistake of starting it on a Thursday. By early Saturday morning, I felt like I had taken a bottle of No-Doze followed with a pot of coffee. My heart was racing and we ended up driving to the local fire station, waking up the EMT who was on duty and having him check my blood pressure. It was sky high as was my heart rate. Needless to say, I stopped taking it and called my Neuro first thing Monday morning.

I went back on the 0.125 dose and after a few weeks, the sleep attacks began. All of a sudden, I just had to go to sleep. I just could not stay awake. I once fell asleep while eating lunch. Fortunately, that side effect went away and I stayed on the 0.125 mg dose for a couple of years.

Later, I went back on the Stalevo 100, and got used to the burning sensation when urinating, and after a while, I started taking Stalevo 150, still three a day. Later, we tried Stalevo 200, but the dyskinesia was terrible, so we went back to the 150's. We tried the 150's four times a day, but that was too much also.

Since I couldn't tolerate higher doses of pramipexole, we tried a different agonist, ropinirole. He started me out on a low dose, 1 mg, three times a day and all seemed to be fine. No racing heart and my blood pressure was normal. A few months later, I began spending hours and hours online, mostly in a Parkinson's chat room. This was also the time when I started this blog. I was glued to my computer screen all day and half the night. I had to be dragged away to eat. The worst part was I didn't even realize that I had become obsessed with all things Parkinson's. The only good thing about my obsession, is this blog and the creative song parodies I wrote while on ropinirole.

Later on, my "off" times were increasing, so he upped the dose of ropinirole to 1.25 mg, still three times a day. All was good for a few months, then my ankles started swelling and the olfactory hallucinations started, so back down to the 1 mg we went.

As a last result, he prescribed Stalevo 100's five times a day (a lower dose, but more often). My symptoms were better controlled and all was well for a month or so, then my cognitive functions started diminishing. Within a few months, I couldn't even answer simple questions because by the time my muddled brain could formulate an answer, I'd have forgotten the question. This was a very scary time for both myself and my Wonderful Husband. Why the extra doses caused problems is unknown as I had been taking 3 a day for years with no problems, but my Neurologist has had several patients who had the same complaint.

Finally I'd had enough, I went back on plain carbi/levodopa 25/100's five or six times a day, and told my Neuro maybe it was time to consider DBS. After about two months, most of my "brain fog" was gone and I was able to pass the neuro-psychological testing with flying colors.

During my overnight hospital stay for my DBS surgery, a nurse tried to give me the wrong medicine, he tried to give me 1 mg of pramipexole instead of ropinirole. Since 0.25 mg had sent my heart rate and blood pressure through the roof, can you imagine what FOUR times that amount would have done? And they had just drilled holes in my head! Their pharmacist had it listed as an equivalent substitute. Before I left, another nurse tried to give me the wrong dose of ropinirole, but I caught that mistake as well and refused to take it. So, you need to know EXACTLY what you take.

Since DBS, I no longer take the agonist ropinirole and I doubt I will ever take it or any other agonist again. I just take plain old carbi/levodopa 25/100 as needed, which is usually half a pill 2 or 3 times a day.

Just because I had the above listed side effects, doesn't mean you will. You should be aware of all the potentially serious side effects of ANY medications, not just Parkie meds. Discuss ALL medication changes with YOUR DOCTORS.


Clicking on the colored words will open a new window and take you to a different story.

Posted by Parkinson's Humor by Yuma Bev at 11:00 AM