Where the Heck is Yuma?

There are many people who LIVE in Arizona who don't have a clue where Yuma is, so don't feel bad if you don't know. Yuma (pronounced YOU-mah) is in the southwest corner of Arizona. Occasionally, someone will call it YUMM-ah, which I find humorous.  The Colorado river separates Yuma from California. The border with Mexico is just 7 miles from Yuma at the closest point, although you have to go into California to cross that border legally. On the map below, the towns of Bard, Winterhaven & Felicity are all in California. Los Algodones is in Mexico. There are towns called San Luis in both Arizona and Mexico. I live east of the Yuma City limits in the area called Fortuna Foothills. 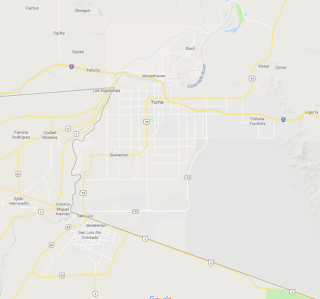 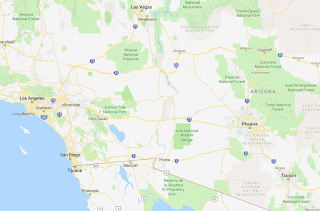 The closest Movement Disorder Specialists are in those large cities, so travel to see one becomes more difficult as our disease progresses and when we most need their expertise.

When I tell people that I live in the desert, most think Yuma looks like these giant sand dunes, but they are about 30 miles west of Yuma, in California.

In reality, most of the undisturbed areas around Yuma look like this.

Unless we get an exceptionally rainy Winter and then the desert looks like this. This was back in 2004-2005. 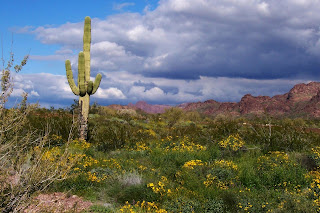 Here are some fun facts about Yuma:

We are the warmest Winter city in the USA, our daytime highs in Dec, Jan & Feb are close to 70°

We are the sunniest city in the USA with an average of 4133 hours of sun yearly. Some hotels guarantee sunshine or you don't pay for the night!

Our airport has the longest civilian runway in the USA at 13,300 ft. The runways are shared by the military, commercial aviation (American Airlines) and private planes.

We are the driest city with average rainfall 2.94 inches. The wiper blades on our cars disintegrate due to lack of use. And if it does rain, we have to hunt to figure out how to turn the wipers on.

Yuma is home to a Marine Corps Air Station, where F-35 Lightning II fighter jets train. It is also home to the US Army Yuma Proving Ground, one of the largest military installations in the world, where all types of weapons, munitions and unmanned aircraft are tested. Living here is like having an air-show every day!

General Motors also has their desert test track here, so we often see the newest versions of the Corvette and Camaro driving around in their camouflage wraps. It's never a dull moment.

But probably the most surprising thing about Yuma is how much we grow. Yuma is the Winter lettuce capital of the World (iceberg, romaine, leaf, baby leaf, spring mix, spinach.) Yuma county is large, over 5500 square miles and is larger than the state of Connecticut. It has some of the most fertile soil in the world and a thriving agriculture industry due to irrigation canals fed from the Colorado river.

Desert Durum wheat accounts for 95% of wheat grown in Yuma County, and about two-thirds of that is exported to Italy for use in making premium pastas. Another unique fact about Yuma County is that some growers also cultivate kosher wheat to be used by Orthodox Jews to bake matzo.

Our farmers stay busy year round. A drive past the farmland is an ever changing patchwork quilt of varying shades of green.

Even though it's a long drive to see my Parkie Doc, I'm happy to call Yuma home and proud to be called YumaBev!

Posted by Parkinson's Humor by Yuma Bev at 7:05 PM