Scott Sherman, MD, PhD invited me speak to the University of Arizona Medical School students again. This would be my third visit. Maybe I should've asked for course credits or at least a U of A shirt? Just kidding. 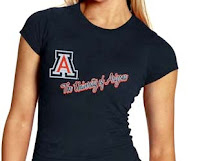 Dr. Sherman wanted to try something different this time. The students would have to use their Clinical Reasoning skills to come up with possible diagnoses, what tests to order to confirm/rule out their theory and how to justify the tests ordered. These were first year students who were ALREADY having to think "Will those pesky insurance companies pay for this test?"

I would start at the beginning of my Parkinson's symptoms, and gradually add more, until someone guessed correctly. I would try to "present" just like it happened in real time. After each symptom, the students would ask questions and try to come up with diagnoses. By the way, this would not have been possible prior to my DBS Surgery as my symptoms would have been too obvious.

In order to not give the students any clues, the class was being headed by Alice Min, MD, PhD, who teaches Emergency Medicine. Also in attendance were Paul St. John, PhD (Cellular & Molecular Medicine and the Clinical Reasoning course director) and Todd Vanderah, PhD (Anesthesiology, Pharmacology, Neurosciences) and of course Dr. Sherman. My favorite Medtronic rep, Adam, was also there, wearing a Medtronic emblazoned polo shirt, but the students would have probably assumed Cardiology, if they even noticed his shirt.

Dr. Sherman (Neurology and Physiology) introduced me simply as Bev from who has come to tell you her story. The classroom was full and the faculty had to stand as there were no seats. My Wonderful Husband was in the corner, behind the podium, so he was only able to get this one photo for you.

I started off by saying, "You have to imagine me as a 37 year old."
Dr. Sherman quipped, "Oh, 2 years ago?" (Who said Doctors don't have a sense of humor?)
I replied, "Good one Doc, but you could have said 10 years from now."
This caused the entire room to burst out laughing.

I told them about my job as a bank teller working part time in the drive thru, reaching up to grab tubes and how intermittent pain began in the area between my right scapula and my spine. The students asked me to describe the pain (hot, burning) and what tests were done. I said x-rays and a referral to chiropractor and ortho. They came up with Repetitive Stress or Nerve Impingement as possible diagnoses. I told them the x-rays were normal. Ortho prescribed physical therapy, which I did with no improvement. Chiro did full spinal x-rays, several adjustments and used a TENS unit which provided no lasting relief.

Three years go by, I had changed to an office type job, and one day I could no longer double click my computer mouse with my right index finger (or any of my right hand fingers.) They asked about numbness or tingling (none), asked if I had right side weakness (no). At this point, they were still thinking nerve or back problem.

I told them that a few months later, I began to have difficulty writing. My hand felt almost like writer's cramp. I asked the students if they still wrote notes by hand, which elicited another round of laughter.

They asked about tremors (there weren't any then, so I said no). A student suggested it could be Dystonia, which surprised both me and Sherman. When questioned as to why she thought so, the student didn't have an answer.

I told them that several months later my right hand began to shake, but only when I tried to use it. They asked me to demonstrate, so I did. A student asked if I had a loss of sense of smell (no) or if my writing had gotten smaller. I hadn't noticed it had, so I said no. Possible diagnosis of Essential Tremor was brought up.

Several months later I was referred to another Ortho, where x-rays and T-spine MRI were ordered (with the area on my back highlighted with markers.) Both were negative and I was referred to a Back Specialist who said "I have a waiting room full of people that I know exactly what is wrong. I don't have the time to figure out what your problem is." He referred me to Pain Management, who gave me some type of shot in that spot on my back. The shot did nothing. They asked about Depression or Mood changes (no). One asked if any Dr. had done any finger to thumb or flipping hands palm up/palm down tests (no).

A year or so goes by and I wake up one morning and can't move my neck without intense pain. My primary Dr. prescribes muscle relaxers and orders a Brain and C-spine MRI (since now he had a good enough reason to satisfy the insurance.) Both come back negative. I am referred to a Neurologist who diagnoses me with Essential Tremor, and prescribes propranolol. By this time, my Father had been diagnosed with Parkinson's, so I ask if I could have it also. I am told, absolutely not.

The tremors are under control, but my symptoms slowly worsen. I end up with a frozen right shoulder, so it's back to a third Ortho, who gives me a cortisone shot and exercises to do at home. My right arm is always curled up; my right hand is in a fist. 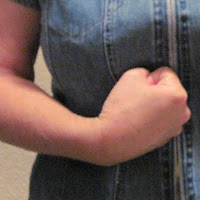 My right foot thuds down when I walk; my right arm doesn't swing when I walk. I feel tense all the time and startle easily. My movements on my right side become stiffer and slower and worsen daily. Within a few years, I can barely move at all. I need help in dressing, getting up from sitting, cutting my food.

At this point, several shout out Parkinson's! And we tell them they are correct. One student asked if I ever had a DaTscan. I said no (it wasn't approved yet.)

I explain how I finally got diagnosed (see The Letter) by Dr. Zonis, who did his Neurology residency at the ! What treatments were tried, the side effects of the various medications and that three years ago, I had DBS surgery.

A student asked how back pain and a frozen shoulder were related to Parkinson's? Dr. Sherman didn't really have an answer, other than to say it was a common presentation in Young Onset PD and what most often caused them to seek medical attention. I told the class that I thought it was a combination of the rigidity and constant muscle tension (dystonia) putting abnormal strain on one side of the body.

I said, "No matter what type of medical professional you become, you will run into people with Parkinson's, so if the symptoms don't have a clinical reason for them, THINK NEUROLOGICAL. Don't be afraid to think outside the box."

Dr. Sherman thanked me for taking time to come and speak and I got an enthusiastic round of applause from the class.

Several students came up to me, after class, to say they had relatives with Parkinson's or to ask more questions. I gave copies of my book to Dr. Min and , who both seemed surprised that I had written a book. I asked Dr. Sherman if I could possibly speak to his Neurology Residents one day. He said he'd work on it!

Right after class, I had my check-up with Dr. Sherman and my Wonderful Husband and I headed back to sunny .

I had a wonderful time playing "patient" with these future Doctors and I hope I left a lasting impression on each one of them.


Clicking on the colored words will open a new window and take you to a different story or website.
Posted by Parkinson's Humor by Yuma Bev at 10:53 AM